Ensembles Tokyo, which began under the direction of Otomo Yoshihide in 2015, is a music festival where people from different musical backgrounds and experiences came together to create a new platform for playing music.

In response to the global pandemic of Covid-19, we decided to cancel the festival’s final edition which was originally planned to take place at Tokyo Tower in 2020.

Instead, we made an open call for online workshops conducted by artists that people from around the world can participate. Additionally, we focused our efforts in trying to convey the ideology and methods behind the music that has been created at past editions of Ensembles Tokyo.

The outcome of the workshop is a video ensemble with contributions from people around the world.

We are also proud to publish an interview with Otomo Yoshihide and Yasuhiro Yoshigaki and videos that document in detail their unique conducting methods. By utilizing a variety of hand signs, a diverse group of people with different musical background and experiences are able to participate in collaborative musicmaking.

The year 2020 will mark the final year of Ensembles Tokyo, which began in 2015. In the midst of the global pandemic, we regretfully refrained from holding our cherished workshops and events such as the Bon Odori dance which would have brought people in close contact with each other. However, we are still organizing an online program that would be fitting to crown our final year.

The concept remains the same: everyone is invited. This year, you can join us from anywhere in the world, as long as you have access to the internet. Playing skills and experiences are not required. Musical instruments are not mandatory, as long as you can make a sound in some way. And as always, all ages, genders, and nationalities are welcome. All you have to do is send us a recording of your performance with your smartphone or other devices as instructed by the workshop facilitator. Let's create a composition together! 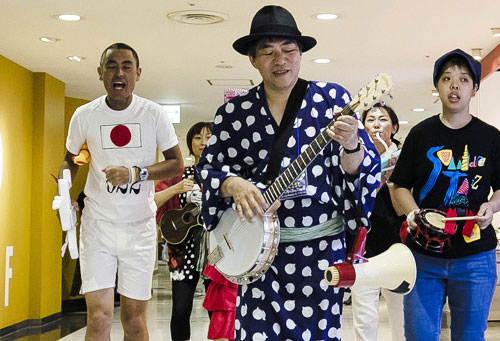 Otomo Yoshihide
Born in 1959. While making heaps of music for film and television, he feels the most at home in the noise and improvisation scene. Guitarist and a turntable player. In addition to performing both in Japan and abroad, he has also produced numerous exhibitions and projects, many of which invited the general public to participate. After the Great East Japan Earthquake, he has been continuing his activities in Fukushima where he spent his adolescence.
http://otomoyoshihide.com/ 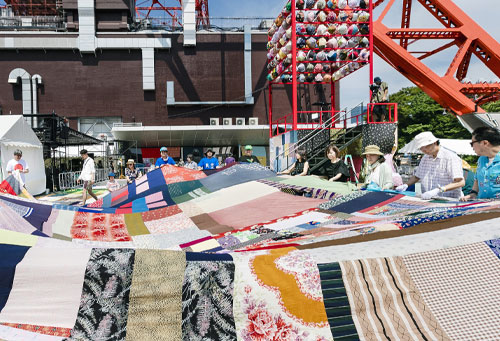 Project FUKUSHIMA!
The project launched after the Great East Japan Earthquake of March 11, 2011 with the aim of informing the world of the present and future of Fukushima, led by musicians Michiro Endo and Otomo Yoshihide, and poet Ryoichi Wago, it consists of a group of volunteers from Fukushima Prefecture and beyond. Festival FUKUSHIMA! is held every August in Fukushima. The "Fukushima Great Furoshiki (traditional wrapping cloth)" by Toru Nakazaki, Cohta Asano and others in the art department, is spread out at each festival and has become the visual icon of the project. In 2015, Seinoshin Yamagishi was appointed as the new representative. Voluntary activities have also begun in each region.
http://www.pj-fukushima.jp/ 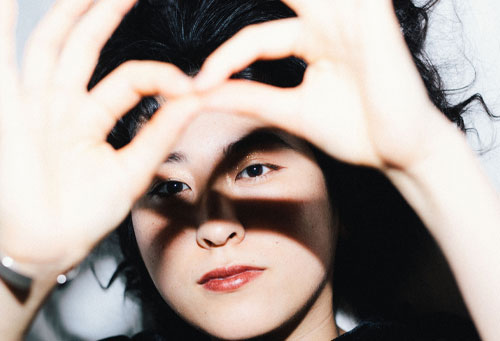 Manami Kakudo
Musician and percussionist who was born in Nagasaki Prefecture, Japan. Using the marimba, various percussion, voice, words, music boxes, cassette tape players and other everyday objects, Kakudo’s style is free and borderless and is widely active in Japan and abroad. In addition to her own solo works, she supports the band "cero", and has participated in live performances and recordings of Tomoyo Harada, ORIGINAL LOVE, and many other artists, and is also involved with the production of commercials, films, dance and installations. Kakudo released the album "oar" (Universal Music), in which she focuses on singing for the first time. In recent years, her field has widened into expression of words and language and has provided lyrics for the songs of Tomoyo Harada and Shun Ishiwaka. In July, she scored the music for the theatrical piece "PLAYTIME" presented at Bunkamura Theatre Cocoon.
https://manamikakudo.wordpress.com/ 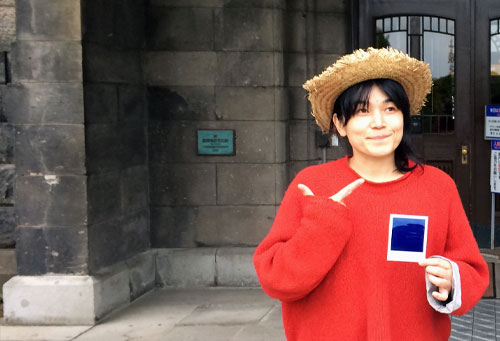 Saya (Tenniscoats)
Alongside running the label majikick records since 1995, Saya has been one of the two main figures of the band Tenniscoats since 1997. In recent years she also has been active as a member of the band Spirit Fest which contains members from Japan, Germany and England, as well as in the instrumental ensemble band ZAYAENDO. In 2020, she has produced a compilation of Japanese indie music, has released Tenniscoats vinyl box set and a new album of Spirit Fest from Morr Music / After Hours, has launched the web service of music streaming called “Minna Kikeru” with her team, and in there, has released a new album including the leading track “Sabetsu to Kyabetsu (Discrimination and Cabbages)”. Saya is a participant/instructor for several workshop series including Ensembles Tokyo, The Otoasobi Project, Nishinari Kodomo Orchestra (Nishinari Children’s Orchestra) and others. Her main interest is how individual tone of voice carries a source of music and how each different individual perceives music differently. 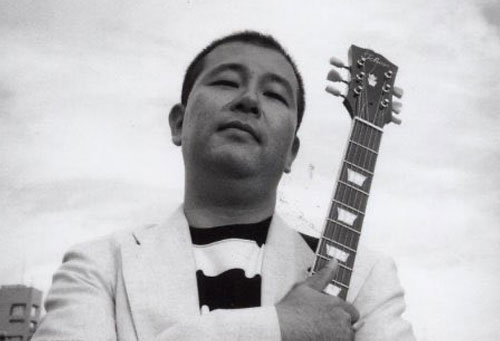 Hijokaidan
JOJO Hiroshige
Born in Kyoto in 1959. He has been performing improvised music for over 40 years as a leading figure of the noise music band "Hijokaidan (emergency staircase)" formed in 1979, as well as a solo artist. He mainly utilizes electric guitar to produce his sound. Hiroshige is the owner of Japan's oldest indie label, Alchemy Records. Besides his music career, he is also an augur on hand at his own shop in Shimokitazawa, Tokyo. 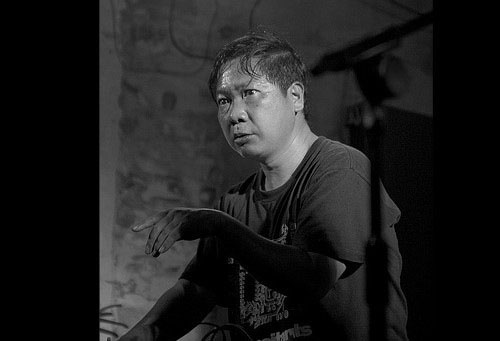 Hijokaidan
T. Mikawa
Born in 1960. Mikawa is a member of the band "Hijokaidan (emergency staircase)" and the founder of his own group “Incapacitants” who pursues the performance of noise music. He does not use conventional instruments, but combines effector devices, oscillators, microphones and special electronic sound generators. He has released numerous albums from the labels of Japan and abroad. He also performs solo and in sessions. 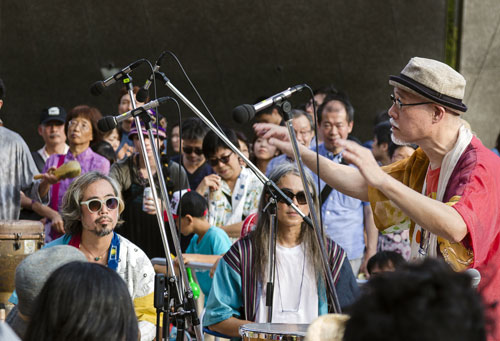 Yasuhiro Yoshigaki with Orquesta Nudge! Nudge!
Yasuhiro Yoshigaki
A percussionist who spins beats and melodies that transcend genres. Born in Hyogo prefecture, Japan. In the 90s, Yoshigaki was a member of a number of groups; jazz combos to avant-pop bands, such as Altered States, Modern Choki Chokies, Shibusashirazu, Ground Zero, ROVO and DCPRG. He has performed with wide variety of musicians such as Otomo Yoshihide, Kazuhisa Uchihashi, Dairo Suga, Yosuke Yamashita, Akira Sakata, Naruyoshi Kikuchi, Yoichiro Yanagihara, Yuichi Ohata, UA, ROLLY, Carmen Maki, Hoppy Kamiyama, Leonard Eto, Jadranka Stojaković, Bill Laswell, John Zorn and many others. Yoshigaki runs a large jazz group "Orquesta Libre" and a percussion ensemble "Orquesta Nudge! Nudge!" Until this day, he has performed in numerous different countries. Yoshigaki has his series of columns in Rhythm & Drum Magazine. He also produces music for theater companies such as Bungakuza, contemporary dance groups such as Co. Un Yamada, films, TV dramas, animations and many more.
http://y-yoshigaki.com
Orquesta Nudge! Nudge!
A percussion group formed in 2003, organized by the drummer Yasuhiro Yoshigaki. The group's members - Yoichi Okabe, Kumiko Takara, Mari Sekine, Taichi, Ryudai, Izpon, Kosuke Tsuji, Yohei Takada and Takashi Nakazato - come from a variety of genres to create an ensemble that mixes structured music with an improvisational approach. Their intriguing sound comes in their tribal rhythms that connect traditional and contemporary mixed culture, and in their approach that encompasses everything from contemporary music to the streets. They are mainly active in their hometown, Tokyo, and have participated in Fuji Rock events.
https://www.facebook.com/OrquestaNudgeNudge/

Ensembles Tokyo is a music festival that is created by people with diverse musical backgrounds and experiences.

With a big furoshiki (Japanese wrapping cloth) as a backdrop, workshop participants were asked to film themselves performing to instructions provided by the artists. These submissions sent from around the world were compiled into a unique video ensemble.

Capacity: 80 participants
Let's get rid of the "good" and "not good" and share the joy of playing with many people. Any instrument is welcome, or not even an instrument, as long as it makes a sound. All genders, nationalities and ages are welcome to join.

Capacity: 30 participants
This is an attempt to make a particular time emerge, by spinning the time around us in our different places and times, what each of us is seeing in the present, with our voices, stories, and words.
When we connect the dots that we have struck in our individual time and space, will the fabricated time become music?
This is an experiment to feel the time together.

Capacity: 80 participants
This is an attempt to synchronize your voice at the source. Let's sing at ease. Instrumentalists are certainly welcome to join.

Capacity: 80 participants
Let's try to make music together without being confined to form or formulas. Any kind of instrument is acceptable as long as it can be played. You can also participate with your voice.

About the Online Big Furoshiki

Workshop Overview
Be sure to read through.

Participants will film themselves perform to a 5-10 minute video (with Japanese and English subtitles) of the artists . Participants are required to film the performance with a smartphone or other device and upload the video data using the specified method. Under the supervision of Project FUKUSHIMA!, tells you about the background color. for your performance.

Your submission will become part of a video ensemble, playing together with other performers from around the world! The final musical work will be published on this website as well as uploaded to YouTube.

Over the years, Ensembles Tokyo developed various conducting methods that utilize hand signs, allowing for groups of people with diverse musical backgrounds and experiences to participate in collaborative musicmaking.

The video documentation illustrates how hand signs are used in the workshops. Additionally, the history and thought process behind these signs are introduced through extended interviews with Otomo Yoshihide and Yasuhiro Yoshigaki.

We hope that these materials will inspire you, wherever you are, to enjoy and make music with others.

*These videos were filmed with the necessary countermeasures and guidelines to prevent the spread of Covid-19 as of October 2020.

* We will not use the personal information for any purpose other than the scope of the intended use for the implementation of this event, in compliance with laws and regulations.
* The content is subject to change without notice.